‘In fourteen hundred and ninety two

….as any English school child of my generation will tell you.  Well, he actually set sail from Palos, not too far away from the city of Seville: soon it became the gateway to the New World.  Ships returned here laden with silver bullion from Bolivia, Peru and Mexico.  And before that, in the 12th century, Seville had been the capital of the Almohad Moorish dynasty.  So it’s had a splendid past, and has still scores of magnificent buildings from those glittering periods in its history.  Seville is famous for its fiestas, its party-going spirit, its bullfights even, and as the home of the tapas, those delicious snacks made the more enjoyable for always being shared with friends.  What’s kept us from visiting it until now, I ask myself?

We spent a week there.  In mid-October it should have been as warm as an English summer’s day.  But in true English style, it rained, deluged, bucketed down for the whole of our first two days.  So we’ll draw a veil over the soggy sights we saw then. I won’t tell you about the wonderful cathedral and its Moorish tower, la Giralda , or about the palaces of Real Alcázar: you can read about those elsewhere.

Let’s talk instead about other highlights: Pilate’s house, for instance.  It’s sometimes called the poor man’s Real Alcazar, but for us it was magnificent.  A mixture of Gothic, Renaissance and Mudéjar styles, it’s a visual feast of elegant and beautiful tiling of the kind even the meanest back street in Seville will produce a dozen examples.  It was the then Mayor of Seville who started to have this house built following his pilgrimage to Jerusalem in 1519. He discovered that the distance from Golgotha to Pontius Pilate’s house was the same as the distance between his planned new home and a Sevillian temple known as Cruz del Campo…. so Pilate’s house it was.  Here are some photos. 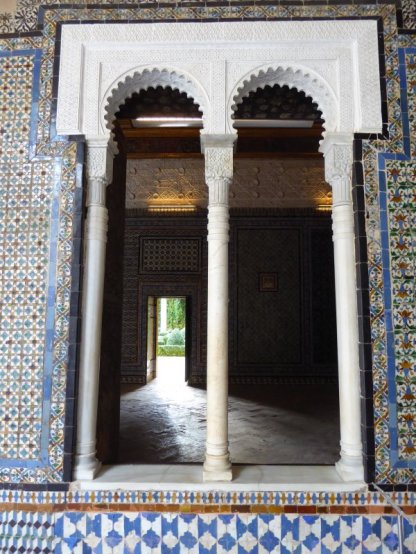 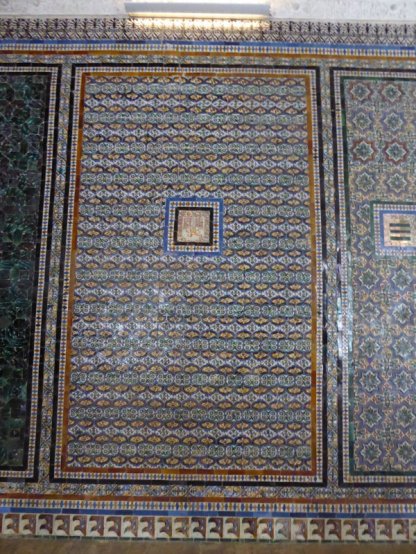 The historic centre of Seville is a warren of tiny streets, some barely longer than a garden path, no wider than a single car.  How does anyone become familiar with them?  We didn’t.  Once, Malcolm decided to explore what he thought was the parallel street to mine and meet me on the corner.  We didn’t see each other again for an hour, not till we’d both abandoned meeting again and each returned to the hotel.  On the way of course, we both got waylaid by splendid ceramic tiles in entrance halls, over doorways and climbing up facades.  Every stroll through the town was an act of discovery. 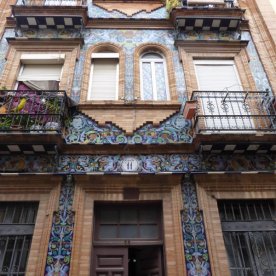 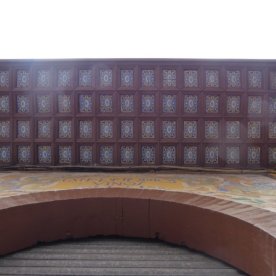 Even the undersides of balconies are decoratively tiled.

And street names – often with a strongly Catholic flavour – are always shown in ceramic tiles.

A favourite: this frieze runs the whole width of the building on both sides.

A narrow street by night.

A particularly fine terrace just near where we were staying.

We had a special evening on the Guadalquivir river, seeing the city by night.

I went to a truly wonderful concert, ‘In-vocazione’, that I spotted advertised in a craft-makers cooperative.  Sixty singers from Seville, from Italy, and a Franco-Russian-Spanish(??) group sang together, plundering mainly from the folk traditions of southern and Eastern Europe, of Iran, of India,.  At the beginning, a single male voice was joined by other men, then by women singing from the balconies.  As one group moved down to join the men, more sang from the balconies and others, joyfully, among the audience. They inhabited and involved the architecture of the building as much as they did us, their audience.  At the end, as part of their encore, they taught all of us there to join in one of my own choir’s standards, ‘Belle mama’. Singing ‘our’ song with these astonishing choirs was one of the most moving moments of my life.

The women start to sing. 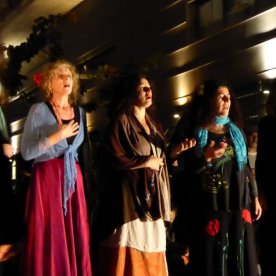 We didn’t expect to enjoy visiting the Bullfighting Museum.  But we did.  Who knew that bullfighting was devised not as a spectator sport, but as a means of teaching the soldiers of the nobility how to go to war with the enemy?  Or that Spain’s youngest bullfighter in recent times was merely nine years old?  Or that tickets on the black market to a specially anticipated fight can cost as much as three thousand euros? No wonder we don’t plan to go.

And tapas.  We ate somewhere new every day.  We ate different dishes every day. The variety of foods on offer is quite extraordinary, from refined and elegant to rib-sticking and peasanty, with fish very often being star of the show.  Here’s a picture of a DIY dish.  Bake your own chorizo over a little bonfire of alcohol.  Delicious.

Let’s end on a popular, un-cultural note.  Here’s a sequence of decorated garage doors and graffiti that made us smile as we mooched round the city.

Do you fancy going to Seville soon?  I certainly do.

No sooner back from England, than we were making tracks for Barcelona.

Why?  To help daughter Emily and her flat-mate move.

Saturday saw us leave Laroque with a large and unwieldy trailer load of cast-offs for Emily and her flat-mate’s new home. Two beds and mattresses, a table, a blanket box, a linen basket, a bike, ephemera from the kitchen, all kinds of detritus.  We’d spent an afternoon on Friday packing the load, carefully, and with lots of thought and planning.  Ten minutes after we set off on Saturday, it became unstable.  We stopped and rejigged, went on a few miles… and more of the same.  It started to rain, with quite high winds.  We stopped a third time, bought more rope (OK, washing line.  It’s all we could find), really had a good go at things, and finally, we had a steady load that got us all the way to Barcelona, in said wind and rain, as far as the frontier.  Hooray!  In Spain, the sun shone.
In Barcelona, we unloaded, unpacked, fetched and carried, and did our best to get the new flat …er …  ship-shape.  Sunday morning, while the girls played house, Malcolm and I were off duty.  What to discover today?  Well, look one way from the street outside her flat, and you’ll see far below you, the sea.

Look the other way, and you’ll see far above you…. bunkers.

Those bunkers are among Barcelona’s lesser known secrets, and they looked intriguing.  It’s a toughish climb up there, but stop for breath, and your reward is increasingly dramatic views of the city spread far below you.

At the top, there are battered concrete remains: the bunkers that were built by Spanish Republican forces in 1937 in their efforts to defend the city.  Little could be done against the air power of the Nationalists.  The Republicans were under-resourced, and their best hope was to use this high vantage point as both a look-out,and a place from which to launch protective curtains of artillery fire.
Once peace was restored, the bunkers came into use once more: a chronic housing shortage in the city meant that right up until the 1990’s, the site developed into a shanty town, housing up to 600 residents, though the council resisted providing services such as water and refuse disposal until well into the 1980’s.  Remnants of this improvised town can still be seen in vestiges of tiled floors.

View of the city glimpsed through the morning glory 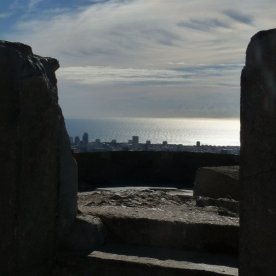 Another, glimpsed through the remains of a bunker.

Floor tiles from the former shanty-town.

Looking down the other way, away from the coast.

Now, you’re most likely to make the trek up here to get the very best views of the city: better than from Tibidabo.  It’s not the view those Republican forces saw.  From up here at La Rovira, you look down on a modern city: recent tower blocks dwarf the older buildings, though your attention will always be caught by the spires of la Sagrada Familia, still under construction.  A highly-recommended excursion.  Get yourselves there before everyone discovers it.

View in a narrow city street.

A street in the old Jewish quarter.

A lizard? Or a door handle? 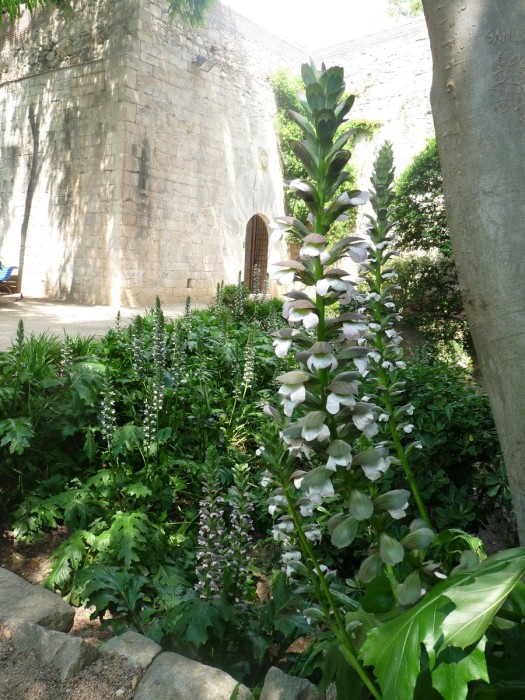 The Jardins d’Alemanys near the city walls.

Aloe vera near the city walls.

The cathedral seen from the city walls.

Housing alongside the river Onya.

Lovers’ padlocks , or bike locks on a bridge over the Onyar?

Looking along the river towards the Cathedral.

This is cheating. It’s Barcelona. Where we went – can you imagine? – for a vegetarian Indian meal. Jolly good too.

We had a mid-week break in Girona last week.  Because I needed the dentist.

Despite the general all-round good quality of the French health system (though it’s not what it was), dentistry does not on the whole measure up.  Ask anybody round here to recommend a dentist, and they’ll either say ‘not mine, definitely not mine’, or suggest someone miles and miles away with a weeks long waiting list.

So when my daughter over in Barcelona recommended her dentist in nearby Girona, it seemed too good a chance to miss.  A quick holiday in a town on the ‘to-visit’ list, a chance to see Emily, and a pain-free set of teeth.

The dentist there sorted things out, but said he’d need to see me again.  So we realised we didn’t need to dash round on some frenzied must-see-everything-double-quick self-imposed tour.  We took our time.  We wandered up and down the narrow stairways that make up the ancient Jewish quarter, walked the old city walls, and spent time in the cool shaded Jardins d’Alemanys.  There was time for an early morning coffee, a relaxed meal, a cool beer in shady squares among the narrow back streets.

In its day Girona has been invaded by Romans, Muslims, Franks, enduring over 30 sieges in 800 years.  As Robin Gauldie, travel writer says: ‘It’s like Barcelona in miniature, with all the history, heritage and great food but without the insane traffic’.  We don’t need the excuse of a toothache to go back.  There are churches to visit, museums to explore, gardens to relax in, meals to enjoy.  There are riverside walks, and the countryside beyond.  So much to do and see, but all within walking distance of the ancient city centre.  Roll on my next dental appointment.

To view any of the pictures in a larger format, simply click on the image.