This post probably won’t make much sense if you’re not from the UK.  It won’t make sense even if you’re British if you’re not at least in your mid- 50’s.  You won’t know of a world where your radio listening choices were limited to the Home Service (much like Radio 4), the Light Programme (much like  Radio 2) and the Third Programme ( much like…. yes, Radio 3).  What’s missing from this list?  Yes, indeed, Radio One.

If you were a teenager before the mid 1960s, you weren’t going to get much joy listening out for a diet of pop music by choosing the BBC.  The only option was to tune in to the commercial Radio Luxembourg.  The amount of music it offered grew rapidly throughout the ’60s, but anyone from my generation will remember the commercials too.  Hands up anyone who can remember Horace Batchelor’s ‘Infra-Draw’ method for winning the football pools, turning the previously obscure Bristol suburb of Keynsham, ‘spelt K-E-Y-N-S-H-A-M’ into a household name?

I’d listen whilst allegedly doing my homework, but in 1964, along came another listening choice, broadcast, for goodness’ sake, from a ship anchored four miles off the coast of southern England.  This was Radio Caroline.  By broadcasting from the waters, it avoided the need to be licensed, and that’s why it quickly became known as a ‘pirate’ radio station. The single southern ship was augmented by others broadcasting from around the British coast .  The tag-line was ‘Your all-day music station’, and like Radio Luxembourg and certain American stations, the top 40 was the usual diet, presented by names who later became the mainstay of mainstream radio:  Tony Blackburn, Simon Dee, Johnny Walker……..

By insisting that the broadcasts potentially interfered with radio messages to shipping, legislation succeeded in making the pirates illegal in 1967.  They continued nevertheless, but their hey day was over, because the BBC gave in.  Radio One was born (and Two, Three, Four, and later Five), and most young people exchanged patchy reception from the pirates for the more certain transmissions of the BBC.

Why the history lesson?  Because this last month celebrated the 50th birthday of Radio Caroline.  It still broadcasts via the internet, but up in Liverpool, for one month only Radio Caroline North set itself up on Lightship LV23, in Albert Dock, for a 1960s and 1970s nostalgia-fest.  DJs from the era were wheeled out to have fun and give listeners fun too, playing old favourites and patently enjoying themselves as they chatted over the airwaves.

And one of those presenters was my son-in-law, Phil Sayer.  If you lived near Manchester in the 1980s, you might remember him as one of the presenters  of BBC North West, and later he was on radio stations such as Piccadilly Radio and Smooth FM.  These days he and my daughter run a successful voice-over business, but both still enjoy a chance to do a spot of work on the radio when the chance arises.

We all made a trip to Liverpool on Radio Caroline North’s last Saturday: daughter Elinor, the twins, Malcolm and me.  On the way over in the car we demanded, and got, a mention on air. Once on board ship we clambered up narrow stairways  to get to the cramped studio with its blast-from-the-past transmitting equipment, and found ourselves in the company of radio-geeks and nostalgia seekers from all over the north-west .  Fun all round.  And here are some pictures as a souvenir.

View through a porthole on board. 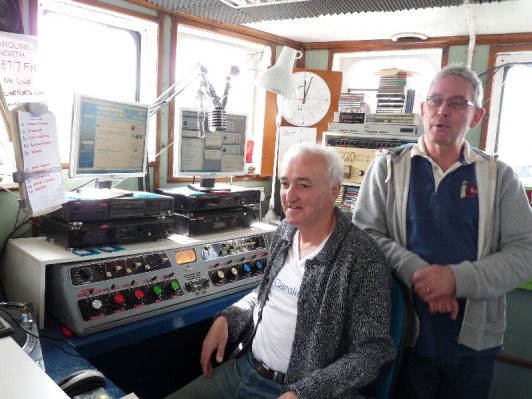 Phil’s gone off air and has just handed over.

Remember all these? And old money too?

A view of the Albert Dock. 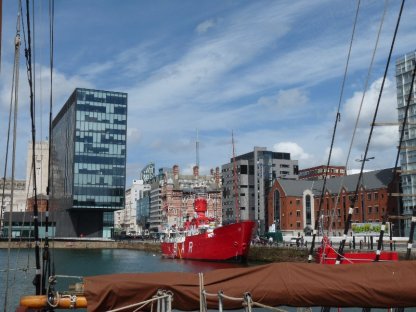 Goodbye, Radio Caroline!
Follow From Pyrenees to Pennines on WordPress.com