Skip to content
I promised to tell you the story of the Hospital de Santa Creu i de Sant Pau Barcelona, which we visited the other day.
It’s a story that goes back to the 15th century, when Barcelona already had six hospitals.  In 1401 these merged onto a new site in Raval, to offer improved care to the sick.
By the 19th century, these facilities were too small, too outdated, no longer really fit for purpose. A Catalan Banker, Pau Gil, put up the money to fund a truly enormous and visionary project: a whole community of buildings offering state-of-the-art care to the poor of the city.  The plan was for facilities of the highest quality, designed in cutting-edge modernist style by cutting-edge Modernista architect Lluís Domènech i Montaner.
Modernism?  Think of it as Art Nouveau, Catalan style. You’ll recognise it in the works of Antoni Gaudi. Montaner found inspiration from Moorish architecture. Playful looking mosaics and the light-flooded areas are the special feature of his buildings.  What we noticed straight away was bold colour, bold decoration: rich-hued tiled roofs: and within, tiles and mosaics in sunny yellow, grass green, sky blue.

Sun, grass, sky.  Why not remind the sick inmates of a cheerful world outside the hospital?  Why not have light, airy, high-ceilinged rooms, tiled throughout for ease of cleaning, and because they would never become dingy and faded?  Why not build underground tunnels, tiled in cream, so that patients could be moved round the site without being exposed to the elements? Why not build a decent well-lit operating theatre, well-stocked libraries for doctors to consult, and set all these buildings among gardens which patients and staff alike could enjoy?

This was a Christian foundation.  Nuns provided nursing care until the 1990s, as they had done since the hospital’s earliest years  Mosaics in the building told stories from the Christian tradition, such as that of Saint George slaying the dragon.  Other carvings and statues relied on ancient legends.  This frog nursing a baby frog, for example, is an old symbol of caring love.

Originally, men and women were separated, but later, the hospital was organised by specialism.  Now, although research continues here, modern buildings behind continue the work of the hospital.

The foundation stone was laid in 1902, and facilities were developed until about 1930.  Large parts of the site were never built at all, from lack of funds.  This isn’t surprising.  There is nothing of the workhouse about this place.  It’s a beautiful, special site, fully deserving of its UNESCO World Heritage status, acquired in 1997.  It only opened its doors to visitors a few years ago, and it’s not yet truly on the tourist trail, despite being just up the road from then Sagrada Familia which is always surrounded by hordes of tourists.  Visit it now, while it’s still an oasis of calm.  It’ll be somewhere you’ll remember forever.

I’d intended to go into the story of this place in more detail.  But a fellow blogger, Restless Jo, whom I ‘met’ only recently, introduced me to a series of posts by a blogging friend of hers, Jude.  Here’s a link to the first one, from which you can reach all the rest.  She tells and illustrates the history of this place so well that, quite simply, I don’t have to. 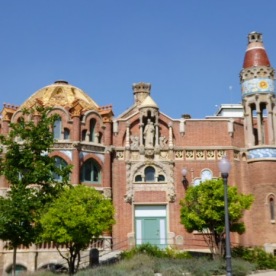 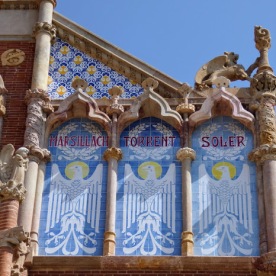 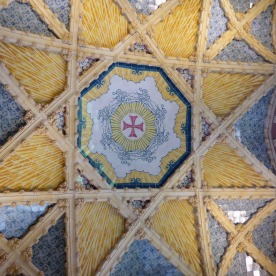 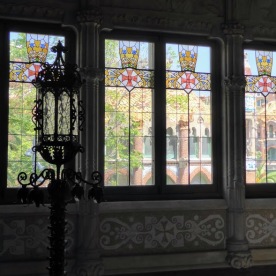 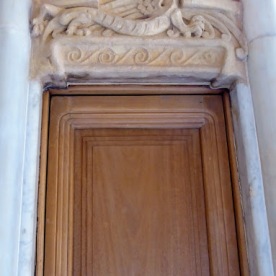 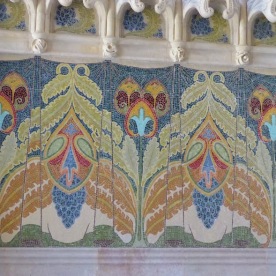 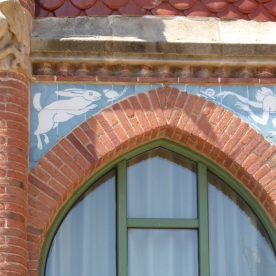