Bang in the centre of Ripon we have a supermarket, Sainsbury’s. Nearly a fortnight ago, when it was full of busy shoppers, it was evacuated. It hasn’t been opened since.

The cause? A sink hole. In Ripon, we know about sink holes, those vast gaping deep holes that suddenly appear, cracking open the surface crust. They cause alarm and distress and considerable damage when they occur. Back in 2014, a couple returning to their house near the town centre found they couldn’t open their back door, heard noises…. and realised the back of their house was collapsing into a hole. It continued to widen, and they and their neighbours were evacuated. 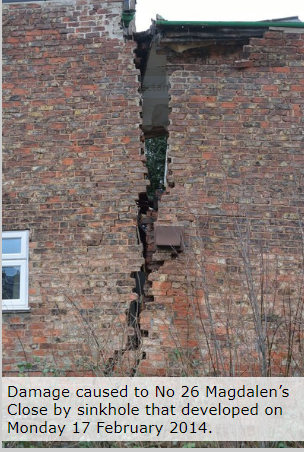 The Sainsbury sink hole doesn’t look much. But it’s thought to be 100 feet deep, and is right next to the fire escape. Is this hole the beginning of something bigger? The geologists are on the case.

Gypsum is the problem. Much of Ripon is built over this highly porous rock, and as water from the several rivers near the city run down from the higher ground to the west, it dissolves the rock into a maze of caves whose tracery of walls become ever more precarious. As the surface level of the ground water fluctuates, so does the level of danger caused by the problem. Here’s the story.

It’s all hot news every time it happens. Then most if us forget about it …. till the next time.

28 thoughts on “The Sainsbury sinkhole”