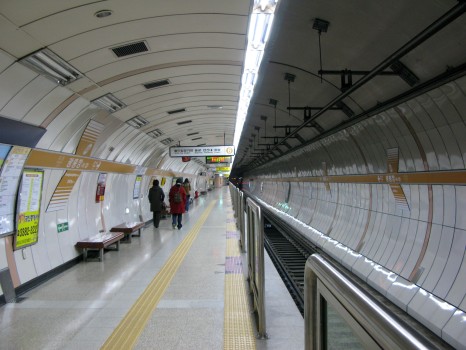 Why go for a good long walk?  Well, for the pleasures of the countryside of course.  The views, the mulchy paths through woodland and across meadows: all the sights and sounds of  The Great Outdoors.  But for most of us, there’s another reason too.  We want a decent bit of exercise.  Get those legs into gear!

It’s no weather for walking at the moment, so in front of the fire, we fell to reminiscing about walking in South Korea.  Not the mountain walks to hidden temples, secret waterfalls.  No, we remembered walking in the metro systems of those mega-cities of Seoul and Busan.

It was courtesy of the subway that we got from A to B when we were tourists in those cities.  Our command of hangul was so limited that the bus had disappeared round the corner before we’d decoded its destination.

Announcements on the stations were helpfully in Korean and English, and you knew which direction the train was heading in, because as it pulled into the station, a tune would play.  Outward – one tune: inward, another.  One of Busan’s tunes was a few bars from Vivaldi’s ‘Four Seasons’. 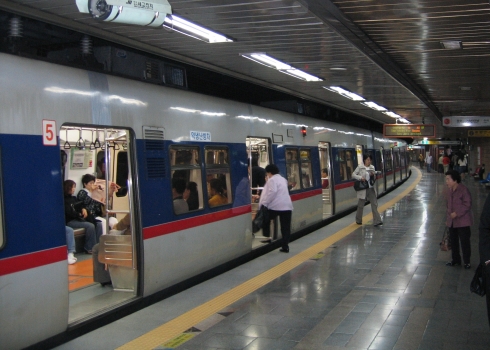 Seoul subway. Once in the carriage, we older travellers had a dedicated area where the younger commuter wouldn’t dare to sit, unless disabled or pregnant.

But all that’s for when you’d reached the platform – sorry – ‘tracks’.  First find your platform.  At one station in Busan, I found that once below ground, I still had a whole 750 metres to walk to get to the automatic ticket barrier marking the station entrance.

Here we are. Exit number 13

Some stations were vast, with up to 16 exits spread over a large geographical area.  Leave by the wrong one and you could find yourself clueless, or stranded on the wrong side of an impenetrably busy highway.  Within the station, distances can be so great that they’ve often installed travellators – not to mention three or even four long steep sets  of escalators plunging far into the earth. Or a lift – sorry, elevator – four storeys deep.  But it won’t get you out of walking, walking, walking, along sparklingly clean tunnels, unending platforms. No wonder every station has scrubbed and user-friendly public toilets for the weary traveller.

And who knew that stations can have more than one stop? If, for instance you need to transfer to another line at Eulji-ro in Seoul, you may need to catch a train to get to the line you’re changing to.  And then there’ll still be a route march to get to the right platform.

If your main interest in walking is to burn off the calories, I can recommend a trip to the metro system in South Korea.  Plan a journey from one station to another, build in a couple of line changes, and you’ve more than got your 10,000 steps a day under your belt. 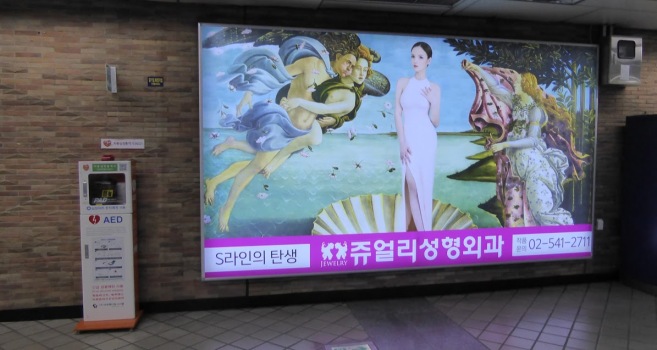 Here’s a challenge we spotted whilst walking down those the long station corridors. Guess the work of art inspiring this advert. Answers in ‘Comments’ please!

17 thoughts on “Hiking round the subway”