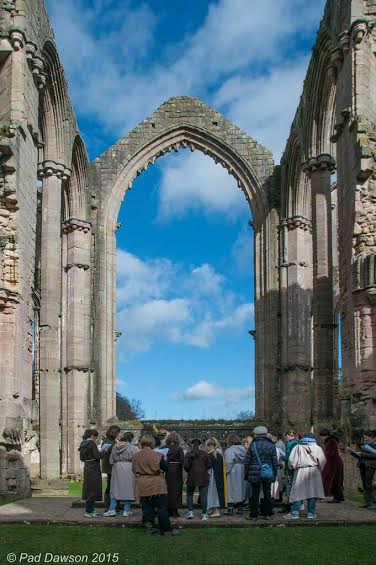 When teachers bring parties of children to Fountains Abbey, we often tog them all up in monastic robes, and explore the site with them .We want them to get a feel of the day-to-day life of a mediaeval monk. What? Prayers eight times a day? No underclothes? No talking? No heating? They’re impressed, in a horrified kind of way.

Then they go away, with only brief notions of the story the Abbey itself has to tell. Or why the place is a roofless ruin.

Until this year. Now they can come with their teachers and ‘Act the Facts’. They’re given props – perhaps a simple cape, a feathered cap, a woollen robe, a crown . These turn them into an early monk, a master mason, an Italian wool merchant, a dastardly baron, or even Henry VIII.

They have a script. It’s a melodramatic pastiche telling the Abbey’s turbulent history. Simple God-fearing beginnings, then powerful prosperity, then war, plague and corruption all leading to the final action. Henry VIII dissolves the monasteries.

The question at the beginning of the play is –

‘Who destroyed the Abbey?’

Acting it out, the children lose their places, stumble over words like ‘Cistercian’ and ‘lavatorium’, and forget which character they’re playing.

Honestly, what’s the point? It’s too complicated. They’re learning nothing.

Then they reach the end. We ask them to line themselves up. Twelfth century characters first, then thirteenth… and so on, through to those who bring the story to an end in 1540. We ask them which century was best.

And that’s when we realise how much they’ve learnt. They talk passionately about the simple piety of the early days set against the laxity of later centuries. They discuss austerity versus comfort. They talk feelingly about the plague, and the reasons for the Dissolution of the Monasteries.

And in telling the story of the Dissolution, they’ve solved the mystery of why Fountains Abbey is a roofless ruin.

Back at school, there’s so much for their teachers to build on. The ruin has brought history to life.

Come and see it for yourselves.  We can’t promise you a feathered cap, or a cardboard crown, but you could join one of the regular tours.  You’ll get a real taste of history as you soak up the special atmosphere of this special site.

20 thoughts on “A history mystery”