‘Even in 1215 London was an independent sort of a place: rich, well-connected and hard to govern. With nearly 15,000 residents it was already the largest city north of the Alps. Its merchants were organising a mediæval commune to protect themselves against pillaging barons and a taxing King, and its diverse trading population had strong connections to Europe and Scandinavia.

Meanwhile, bad King John was in trouble. He was retreating in France, running out of money and losing control of his Barons. Discontent was turning into open revolt and the King was very short of allies.

In 1215 the King was persuaded to issue a Royal Charter that allowed the City of London to elect its own Mayor. We presume that he gave his blessing to the commune in order to keep the City on his side, but there was an important condition. Every year the newly elected Mayor must leave the safety of the City, travel upriver to the small town of Westminster and swear loyalty to the Crown. The Lord Mayor has now made that journey for 800 years, despite plagues and fires and countless wars and pledged his (and her) loyalty to 34 kings and queens of England.’

That’s a quotation from the official site of the Lord Mayor’s Show.  This is not so much a show as a procession that over the centuries recognised the Lord Mayor of London as one of the most powerful men in the country. This may no longer be the case, but in its day the procession was one of the greatest spectacles in the country, worth a mention by the likes of Shakespeare and Samuel Pepys.  It’s still the occasion when the new Lord Mayor travels in a splendid coach which, were it to be built today, might cost some £2,000,000 to build.

You’ll see city businesses, Livery companies, charities, the armed forces, police, Londoners from every walk of life, marching or on floats reminding us of the complex and varied history of the City of London, a small square mile area at the centre of the now enormous wider city, which is some 607 square miles in area.  London has its own Mayor, an elected politician (currently Boris Johnson): please don’t confuse the two offices!

We were in London for a couple of days.  Son Tom was singing in a concert with his Choral Society on Saturday evening, and for the rest of the weekend, the five of us, including four-month old William, became tourists.  Four month old babies have a habit of imposing their own daily rhythms on the day, so we didn’t arrive for the start of the procession, or in time to secure a very good vantage point.  But there were highlights, the last of which was the appearance of the Lord Mayor himself in that magnificent coach, accompanied by halberdiers in their ancient uniforms.  Before that we’d seen horseguards, and representatives of some of the great Livery Companies.  These were ancient trade and craft guilds.  They existed all over Europe as Trading Standards organisations, as trade unions, as philanthropic organisations helping members in times of sickness and infirmity, but those remaining in London are unique in their survival, number and diversity. 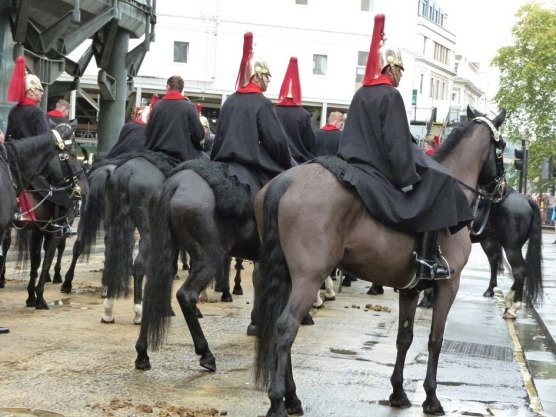 The Royal Horse Guards wait patiently to take their place in the procession. 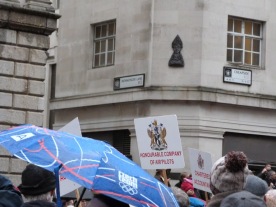 The Honourable Company of Air Pilots.

Not a Worshipful Company.

The Worshipful Company of World Traders.

We have no idea how Yorkshire muscled in.

A splendid coach. But not as splendid as the Lord Mayor’s.

Avery British sight. An elderly woman waits patiently for the Lord Mayor’s procession to wend its way past her again in …. oh, maybe an hour or so

These days we are charmed by the names of the more ancient Guilds: the Watermen and Lightermen; the Tallow Chandlers; the Spectacle Makers; the Painter-Stainers, the Merchant Taylors: we saw none of those, though they still exist. More recent additions are the Air Pilots, the Environmental Cleaners and so on, and we saw representatives of the Guild of Human Resources Practitioners and of the World Traders.  What would Dick Whittington, the 14th century rags-to-riches thrice times Lord Mayor of London, more commonly these days seen in Pantomime have made of them, I wonder?

I love the City of London.  Despite its being home to the Tower of London, to some 4 dozen Wren churches including St Paul’s and a host of other sites; despite its wonderful street names (‘Hanging Sword Alley’, ‘Gutter Lane’, ‘Wardrobe Terrace’), it’s a surprisingly people-free zone at the weekend.  I love the dissonant notes as delicate, ancient buidings and churches butt up against stark modern constructions.  I love it that these modern flights of fancy in glass and steel are obliged to squeeze themselves into street patterns established in the middle ages, and unchanged even after London’s famous Great Fire of 1666.  There’s a surprise around every corner.

And afterwards, a stroll along the Thames, to see more evidence of London old, London new.

11 thoughts on “The Lord Mayor’s Show: a day out in London”