He’s here now.  Not in person of course.  But his books, nearly all of them, arrived with the removal van that brought much of our stuff over from England.

I love Nigel Slater. As a cook, I mean.  He takes such pleasure in all the messier aspects of making and eating food, as I do. Greasy fingers from extracting those last little bits of chicken flesh from an already picked-clean carcass.  Sticky hands from rhythmically kneading and transforming dough from a tacky, gluey lump into barrel-shaped silken responsive mass.  Spoons and fingers to lick after a cake and biscuit-making session.  Weirdly, I even enjoy, if it’s not TOO bad, the burning eyes I get when I absent-mindedly rub them after I’ve been chopping chillies.

During this kind of cooking session, Malcolm and I look at each other with mutual incomprehension.  ‘Want to lick the bowl?’  I ask.  ‘Ergh, no. Shall I get you some rubber gloves so you can keep your hands clean?’  He thinks I’m facing up with commendable fortitude to jobs on a par with sorting out a couple of messy toddlers after a glue-and-paint session. I think he’s missing out.

In the end though, it’s Nigel’s recipes I come back to.  He rarely worries about precise quantities, tasting and adjusting as he goes till the dish seems right. But he does celebrate ingredients in their season.  Here’s what I made the other evening from the remnants of one of Is@’s chickens, and a bag full of the spinach included in our panier of vegetables:  I found the recipe in Tender: A Cook and his Vegetable Patch, Volume 1 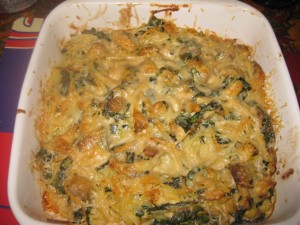 Nigel reckons it serves 4.  I reckon 6 wouldn’t go hungry if they sat down to this lot.

Cook the spaghetti in deep, generously salted boiling water. Drain and set aside. (A little olive oil will stop it sticking together.) Set the oven at 180C/gas 4.

Cut the mushrooms into quarters. Warm the oil and butter in a deep pan and add the mushrooms, letting them colour nicely here and there. Add the cooked chicken meat and then pour in the wine.

Bring to the boil, scraping away at the sticky remains at the bottom of the pan: they will add much flavour to the sauce.

Pour the cream into the pan, bring back to the boil and turn off the heat. Wash the spinach and put it, still wet from rinsing, into a pan with a tight-fitting lid. Let the spinach cook for a minute or 2 in its own steam, then drain it, squeeze it to remove excess water and chop it roughly.

Fold the cooked spaghetti, mushroom and chicken sauce and spinach together then stir in two-thirds of the grated parmesan and tip into a large baking dish. Scatter the remaining cheese on top and bake for 35 minutes until the top is crisp and golden.