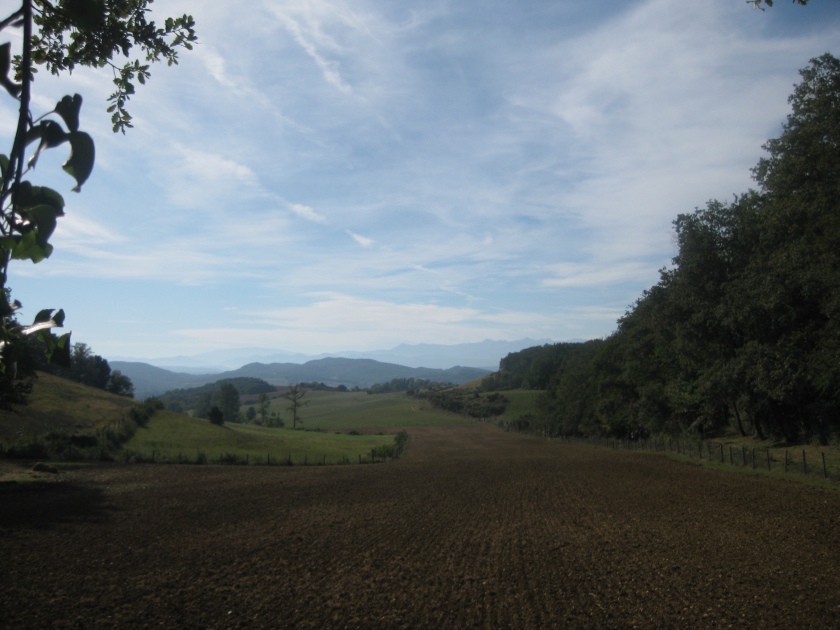 Walking near Mirepoix. My camera does no justice at all to the Pyrénées

The French love walking – as in hiking.  The Fédération Française de la Randonnée Pédestre is an immensely popular organisation with all age groups, and with a somewhat younger image than the Ramblers’ Association.  The French walk alone, with friends, in groups such as ours, Les Rando del’Aubo, and …..on mega-rambles.

Early morning. Getting miles of tables ready for endless breakfasts

We first came upon the mega-ramble when our own group went along, a couple of years ago now, on a walk organised by the FF Randonnée Midi- Pyrénées group.  We and about 800 others.  It’s something of a military operation.  Breakfast is offered, refreshments along the route, which has to be signposted beforehand and cleared afterwards.  Photocopied maps are handed out, and when it’s all over, there are exhibits to mooch round, apéros to drink, trophies to award (the oldest walker, the person who’s travelled furthest to participate, that sort of thing).  There’s often a sit down meal on offer too, though not that day.

171 walkers wait to start off

Interesting, but walking with dozens – hundreds – of others isn’t really our thing. This means we quite often sit out the Sunday walk, because these occasions happen pretty often.

Today, I made an exception.  In France, basic health care is free, but most people chose to top up by insuring themselves with a Mutuelle, which covers all the bits the system doesn’t pay for.  To publicise themselves, and various health charities, the Mutuelles of the Ariège organised a walk near Mirepoix today, and they needed our help.

Early this morning, under the covered market hall in Mirepoix we set up tables, prepared healthy breakfasts (breads, cheese, fruit juices, dried prunes) and registered walkers.  Some people waymarked the route, others acted as marshals, and lots of us got to walk as well. 171 walkers today.  Why would we be so public-spirited?  Perhaps this picture tells you why.

Sitting in the main square in the sunshine, enjoying the meal we were offered as a ‘thank you’ for our work earlier. We’d have done it anyway. A good day.

Something else though.  Sitting down with everyone after it was all over, I reflected how far we’ve come.  This week, Malcolm’s been in England, so apart from exchanging English/French conversation on Tuesday for an hour, and enjoying lunch with an English friend on Friday, I’ve spent the rest of my time walking or eating with friends, shopping, singing, going to the gym and all the rest, entirely in French (well, I’ve done some hard labour at home too.  But I only had myself to talk to).  Over two years ago, when we first sat down for a communal meal, we could see people’s eyes glaze with fear as they thought they were going to be stuck with that English couple.  Could we speak French?  Well, yes actually, but both easy chit-chat, and more serious discussion were difficult for us in a noisy group situation.  Today I was happy to be the only foreigner in the group: instead of fearing me, it was ‘Is that chair next to you free?  May I sit with you?’

3 thoughts on “Walking for the Masses”