Before Christmas, I promised you an alternative version of Cinderella, prompted by a session we’d had in my writing group.

Well, dear reader, I wrote it. And no, I’m not going to share it, because what I found out was that I have no talent for, nor interest in writing fiction. What I produced was workmanlike and …. dull. Which is a shame, as I enjoy reading fiction, every day of my life.

But you did ask, so I’ll share a synopsis with you.

Grizelda and Gertrude lived with their mother in straitened circumstances since their father, a knight, had been killed in the Holy Land during the Crusades. From necessity, and from a belief, uncommon at the time that all are created equal, these God-fearing girls and their mother worked alongside the only remaining servant in running the household. Nevertheless, their mother eventually remarried. Her new husband was a widowed nobleman with an amiable if empty-headed 14-year-old daughter, Cinderella, over-indulged by a friend of the girl’s dead mother and whom she called her ‘Fairy Godmother’.

The two older girls tried to include Cinderella in their simple hard-working way of life, but she resented their efforts, regarding them as dull and boring.

One day, an invitation came from the King to all noble families. He was holding a summer ball to celebrate his son Prince Charming’s 21st birthday, in his summer palace outside the nearby town of Fantasienstadt. Grizelda and Gertrude didn’t want to go at all. Cinderella did, but as she had only just turned 15, her father stood firm and forbade it however much she and her godmother pleaded, raged and stormed.

At the ball, the two sisters, big-boned and gauche, found few dance partners. They looked on as a bewitchingly beautiful young woman arrived and straightaway attracted the eye of Prince Charming. She looked not unlike Cinderella. All evening she and the prince danced, until suddenly, just before midnight, she ran away, screaming in panic. She didn’t even stop to pick up the delicate sparkly shoe she lost in her hurry to escape.

The next day, a royal footman came to the door, bearing this same shoe. He needed to find its owner. Cinderella astonished everyone by claiming it was hers, and proved it by running to fetch its partner. She was swept off to the palace by the footman, and the rest is history. 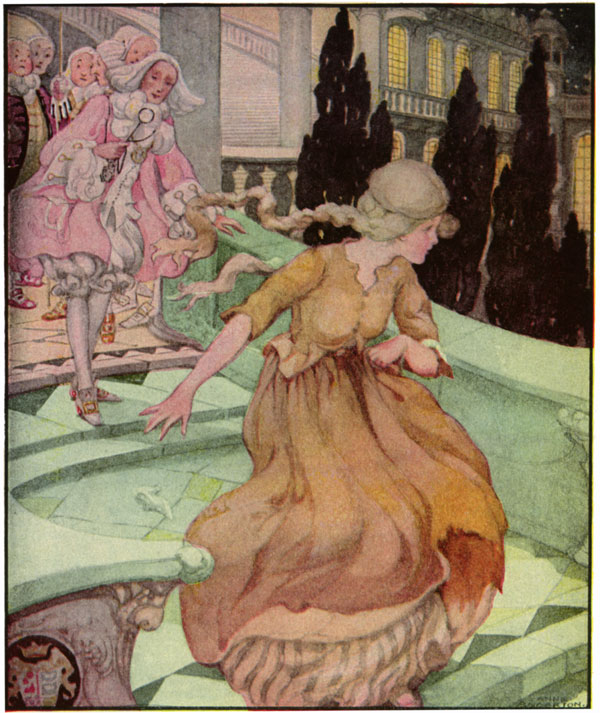 Later, Cinderella explained that her godmother had borrowed all the finery, together with a splendid carriage, so that she could get to the ball. But she had to be home for midnight, when it was to be returned.

And Grizelda and Gertrude? Just one ball had been enough to convince them that the trappings of a noble life were not for them. They both entered a convent, where they lived in devotion and service for the rest of their lives.

19 thoughts on “The panto is over. Long live Cinderella.”