The Queen at the Trooping of the Colour (Daily Telegraph)

I’m neither a Royalist nor a Republican.  I’m pretty indifferent to the lives of the Royal family, though on balance I think they fulfil a useful role in society. Elected Presidents bring little in the way of colour and charm to the kinds of jobs – opening factories and presenting awards – which are their frequent lot.  I don’t begrudge them their large income, because nothing on earth would persuade me that their lives, constantly in the public gaze, are worth living.

Our indifference was a cause of constant bemusement to our French neighbours.  These devout Republicans knew more, via the likes of ‘Hello’ magazine, than I had ever thought to enquire about.  They were astonished that I did not have my finger on the pulse of life in ‘Buckingham’, that I knew little and cared less about Kate and her pregnancy – the Royal story of choice in our final weeks living in France.

But today, the Queen is in the news.  It’s her ‘Official’ birthday, her 90th.  British monarchs have all had two birthdays since the reign of George III in 1748, to enable them to enjoy any celebrations in the summer months.  And today, throughout Britain , communities have welcomed the excuse to get together and party.  The Queen is well liked and respected, the longest reigning monarch in British history, the world’s oldest monarch, and apparently still pretty sprightly and healthy.  That’s worth getting out the bunting, a few bottles of fizz and some home-baked cakes for, surely?

Here’s the Royal Jam prepared by my friend Jonet for their street party in Harrogate. 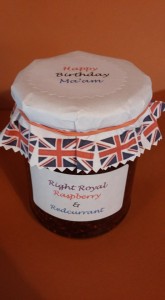 And here’s the party I went to in Ripon.  Three members of our choir live in this particular street, so we all went along and sang to everybody, and ate, and drank  and made merry, and admitted that the date of this particular knees-up had been fixed long before anyone realised it was HMQ’s birthday.

Well, does it matter?  Any excuse for a party.  And since it was a thoroughly English party, the rain arrived, as predicted, at 3.30, just as everyone was being rounded up for rounders on the green.