Here is a tale of a murder.  A murder which led to the building of a very fine church not many miles from here.

In 1870, Frederick Vyner, son of the Marquess of Ripon and Lady Mary Vyner, travelled to Greece with a small band of English and Italian friends and servants.  They were set upon by brigands who had probably been tipped off, and who demanded a huge ransom: £50,000.  Women, children and servants in the party were regarded as useless bargaining tools by the brigands.  They were released.  But five men remained captive, including Frederick.  The money was found to pay off the ransom, but before it could be delivered, the Greeks sent in the army, and in the resulting battle, soldiers, brigands and four of the hostages were killed, among them Frederick Vyner.

Vyner’s mother, Lady Mary, determined that she would build a church in her son’s memory on the Newby Hall estate which was their home.  Her sister, Lady Ripon, was at the same time engaged in a project to build a church at Studley Royal, Fountains Abbey, Ripon.  William Burges , noted Victorian architect, obtained the commissions for both churches in 1870.

I’m going to get to know St. Mary’s Church, and the work of William Burges very well over the weeks and months to come, as I have just been accepted as a volunteer for the National Trust at Fountains Abbey, where one of my duties will be as an Information Assistant at the church.  Yesterday though, as part of our training, we were taken to see the church at Newby, which was until the 1990’s, the parish church of the village of Skelton-on-Ure.

It’s clearly Saint Mary’s sister church, yet more stolid, more weighty in appearance. Originally to have been called St. Michael and All Angels,  the church has a unique dedication – to Christ the Consoler.  Wander round the outside, and you’ll see over the door Christ the good shepherd with some of his ovine flock: a complement to the sheep in the field beyond, at the moment nursing their young lambs.

Within and outside the church Christ is omnipresent, perhaps most spectacularly in the rose window which portrays Him at its centre.  The several ages of man are illustrated on an inner wheel of glass, and the various occupations and conditions of man on an outer wheel: noblemen at the top, working types below.  Curiously, being ‘negro’, seems to be a job in itself.  All turn their gaze upon the risen Christ the Consoler as they go about their business.  It’s easy to imagine this spectacular window being a teaching aid to any cleric needing material for his sermon. 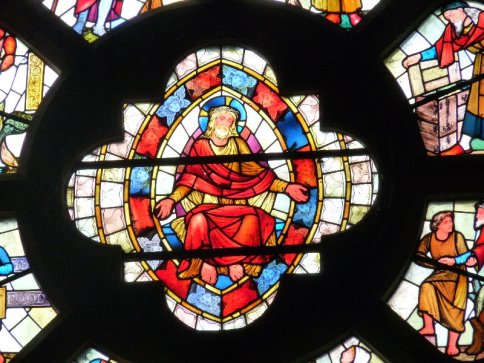 A fisherman and a hunter. 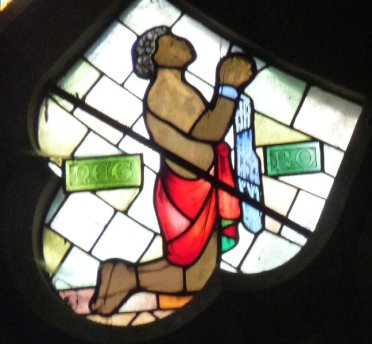 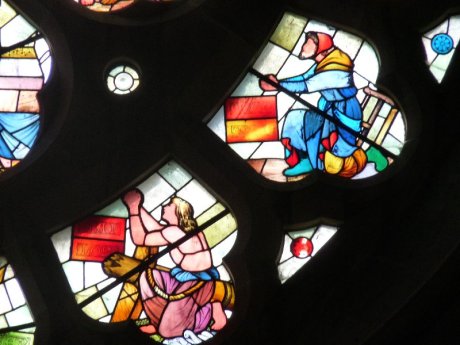 Walk down the nave and you’ll witness the miracles of Christ on one side, his parables on the other, each complemented by the event from the Old Testament which is traditionally held to be the precursor of that in the New Testament.  This one was my particular favourite: the Annunciation, whose forerunner was the story of Moses and the burning bush.

The dominating view as you enter the church is an almost overwhelming sculpture above the entrance to the chancel. Here is Christ’s Ascension with a crowd of 12 looking on.  These are the  disciples of course: but not Judas.  His place is taken by Mary: a very mediaeval take on the event.

The chancel itself forms an intimate place for the Vyner family.  Heraldic misericords record the arms of close and more distant branches of the family, all surrounding as if to embrace the memorial to the murdered young Frederick in a private and understated way.  It’s decorated, as is St. Mary’s, with columns in Irish marble: dark green, plum red, greyish-white.  More stained glass windows of Christ carrying his cross, then crucified, each with a number of Old Testament precursors.

Detail from the organ housing.

Angels rise above the chancel. 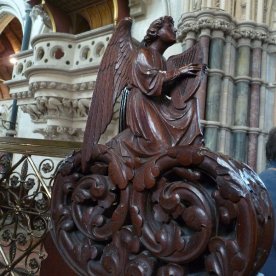 There’s more.  There’s a glittering reredos with the Magi.  There’s a spectacular organ casing set before the chancel.  There’s detail to keep you happily busy and exploring for hours.  Newby Hall and its gardens ought to be on your tourist map if you explore our area.  Don’t leave the church out of your itinerary.

As for William Burges, and the story of the two churches he built here near Ripon… well, there’s plenty here for another day

18 thoughts on “A church for a murdered son”