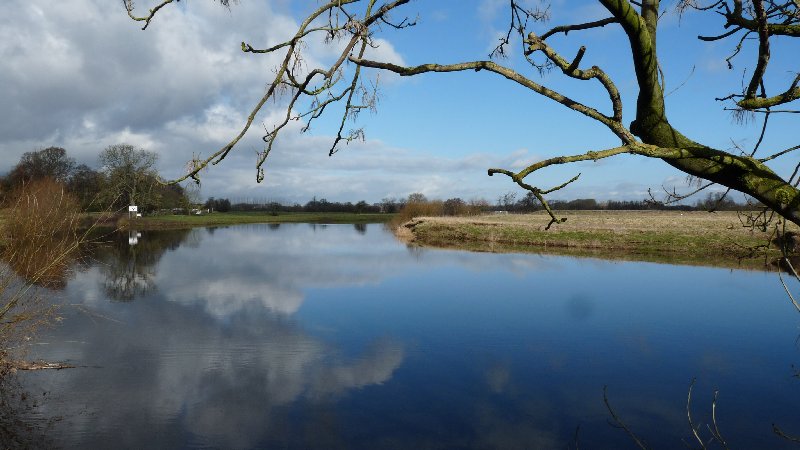 A sunny morning on the River Ure, just before we reached the Canal.

We went for a walk along the Ripon Canal the other day, starting from the point where it meets the River Ure.  Back in its heyday during the Industrial Revolution, busy as it was then, the rural towpath we walked along might not have looked so very different.  Back in its heyday, keels would have hauled coal northwards from the Yorkshire coalfields, and lead and agricultural products southwards.  The canals were the freight-haulage routes of their age, and even though they were busy thoroughfares, the whole business of passing vessels through the three locks in one direction at a time limited the flow traffic to levels well below what those of us who’ve ever been stuck in a bad-tempered rush hour traffic jam on the M1 have experienced.

Ripon Canal is not one of the country’s great canals.  There are water super-highways such as the Grand Union Canal linking London with Birmingham.  That’s 137 miles long. There’s the Leeds-Liverpool Canal.  That’s 127 miles long.  The Ripon Canal runs for just two miles, from Ripon to Oxclose Lock, where it links with the River Ure.  Like many of the country’s canals, it was built in the latter part of the 18th century, between 1767 and 1783, opening up water traffic between Ripon and York, and it eventually put the products of the Durham coalfields within Ripon’s reach.

The railways proved to be the death of canals all over England.  Ripon’s withstood the opening of the Darlington to York railway in 1841, but the Leeds and Thirsk Railway finished it off.  The railway company actually bought the waterway, to ensure local support , but they then neglected it, failing to dredge it, so that it became less and less useable.  The canal was abandoned as a waterway in 1906.

But its fortunes have changed again.  No longer a tool of the industrial revolution, the canal has become a playground for people who like ‘messing about in boats‘*.  The Ripon Canal Trust spearheaded its restoration from the 1960s, and now the whole thing is managed by the Canal and River Trust.  So whether you like boats, barges, or a stroll along a quiet backwater near town, Ripon Canal’s worth a visit.

One of the canal bridges.

Barges on the canal.