We’ve just come back from a short holiday in Turkey.  We’ve just come back from our first organised tour.  We’ll happily go back to Turkey.  But we won’t be on a tour.  There’s only one plus in this form of holiday, as far as I can see, though it’s quite a big one: a Turkish guide, born and bred, brings many insights into Turkey, its people, and their way of life.  There’s a post or two coming about some of the things we learnt.

We were herded on long coach journeys from place to place, where after our official visit, we often had little time to linger, absorb, and just simply ‘be’ in ancient sites that have seen thousands and thousands of years of history.  Large tourist hotels are comfortable but impersonal.  The food they offer is perfectly tasty, but offers only a tiny glimpse of the country’s rich culinary tradition.  And then the herding continues, as we’re compulsorily escorted into stores selling carpets, jewellery, leather.  We longed for more free time.  I snatched the chance late one afternoon to work out how to catch a bus into the nearest town, Ayvalik,  and follow my nose for a few precious minutes.  But I only had three-quarters of an hour before I needed to come back and re-enter the system.

However.  In visiting Anatolia, we’ve seen glimpses of the most extraordinarily rich culture of the area, from pre-historic to post-Classical times.  We’ve seen those places I’ve known about since childhood, when I first heard all those stories about Odysseus, Helen of Troy et al.

Here are some of the photos I took as souvenirs.  Most of the places we visited have survived so well because they lost their reason for being busy, successful places.  Originally on the sea, they are now several miles inland, since Anatolia’s western coastline has been silting up for millenia.  One day it’ll link up with Greece, and who knows what ructions that will cause.

We visited Priene, already important by 300 BC.  It made quite an impression on us to walk its ancient marble streets, built on a grid system,  still intact, complete with gouged marks and notches to prevent slipping.  Its drainage system is still visible, its bouleuterion (council chamber), its temple to Athena, and its theatre, designed to accommodate 6,500 people.

Steps up to the city of Priene. 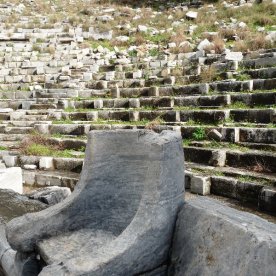 A view of the theatre complete with marble throne.

Miletus was next, a city that was a centre of Greek thought from as early as 1000 BC.  It was fought over by Greeks, and Persians. Later Romans took over.  Alexander the Great, St. Paul….. they’ve all been to Miletus.  And the theatre here seats 15,000……. 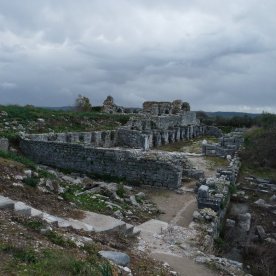 Spreading the weight through a series of arches.

Didyma wasn’t a city, but what a temple!   The Temple to Apollo here has 124 columns and used to have its very own oracle too.  What impressed us was the height of those columns.  How did those ancient builders do it? 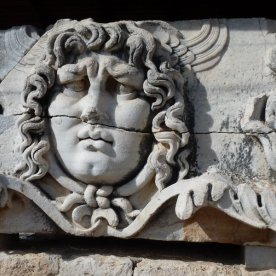 A forest of columns.

And this was all on our first day……

Fast forward to Thursday and a visit to Troy.  I ‘did’ Troy at school.  I learned all about how it was occupied from the Bronze age until well into the 9th century , and how layer upon fantastic layer of history was preserved as each succeeding era built upon the remains of the last.  The site there was ‘sliced’ through by archeologists, first of all by the archeologists’ Bad Boy Heinrich Schliemann, who destroyed by over-enthusiastic excavation almost as much as he preserved, and disposed of his finds to a variety of museums. 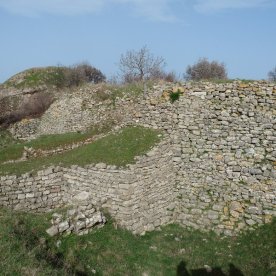 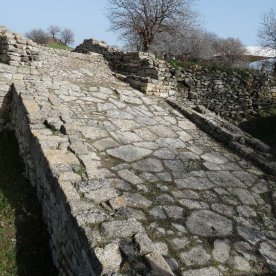 The path to a palace.

…… now being attacked by solitary bees. 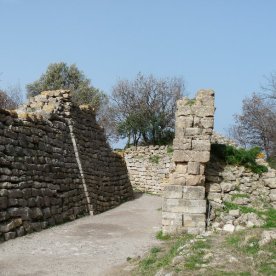 The remains of domestic housing.

Pergamum was perhaps my favourite.  It’s the city that invented parchment – made from animal skin- when the Egyptians declined to let its citizens have papyrus.  We reached the Acropolis, high above the modern city of Bergama by first a lift, and then a cable car: not an option in the city’s hey-day.  It has a dizzyingly steep-raked theatre cut into the hillside with spectacular views which reminded me of parts of the Pyrenees.  It has temples to a variety of Roman, Greek and Egyptian gods and emperors, and its library used to contain 20,000 volumes.  We could have spent hours there exploring: but we got little more than one (we had longer at a carpet showroom). 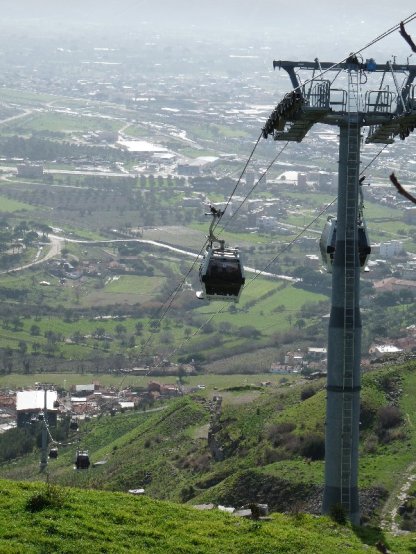 Modern Bergama below, Pergamum above…. 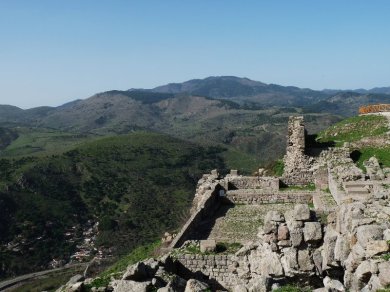 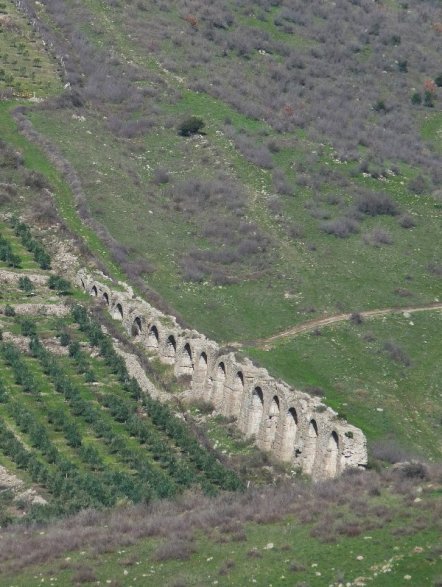 A glimpse of the aqueduct, far below… 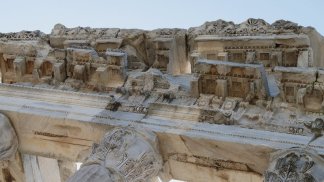 The remains of domestic housing. 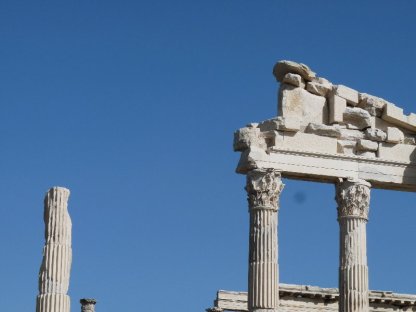 Then Ephesus at last.  This is an extraordinary town which deserves several hours at least of anyone’s time.  We got two hours. It was founded by immigrants from Athens in about 1000 BC, and because of its harbour, thrived under the Lydians, Persians, Greeks and Romans.  It was already silting up by the 5th century AD, and that was that for Ephesus.  Saint Paul wrote letters to the Ephesians, and more recently tourists have been sending postcards of the astonishing quantity and quality of its remains.

All human life is there, from latrines where statesmen would use the time to sit and discuss issues of the day, to brothels, to the 2nd century Library of Celcus, to a 24,000 seat theatre….  There are temples and terraced houses.  These houses are fascinating for providing an almost unique chance to see the inside of such dwellings: the mosaic floors, the wall decorations, the ground plans, the bathrooms and plumbing.

The Odeon: the debating chamber

The astonishing Library of Celsus.

A discreet entrance to the brothel. 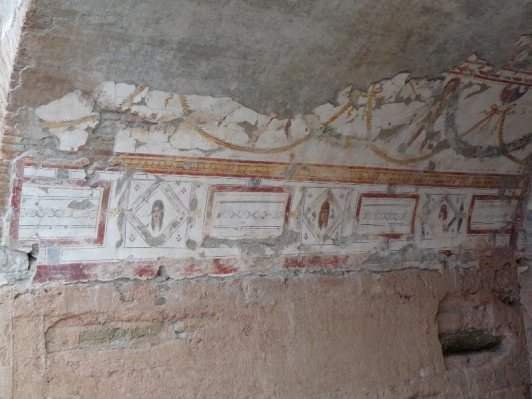 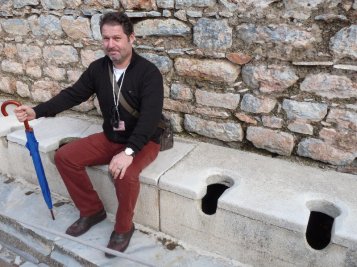 Our guide demonstrates the latrines.

Cats are quite at home at Ephesus.

We’ll have to go back.  We haven’t seen the half of it.