I haven’t been on a ‘proper’ walk yet this year.   First it was the ‘flu, and its aftermath.  Then it was rain or snow on the days when I might have been free to get out for a blow in the breezy cold.  And finally it’s the mud.  Mud’s the one that gets me every time, despite having been given a wonderfully efficient pair of walking gaiters among my Christmas presents.  I find it frustrating, pulling my boots from an oozing, slippery, sticky slick of mud only as a preparation for sliding into the next soupy puddle .  It makes for slow walking on days when briskly striding out is what’s needed to combat the cold.

So today, keen to get out for at least an hour or so, and equally keen to avoid That Mud, I ended up on a star-shaped walk. I turned back down every path I started, and ended up doing a zig-zag circuit beyond the edges of the village. 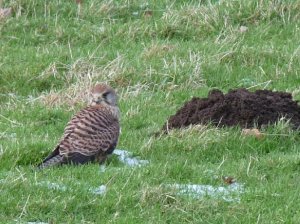 I started off by looking for the young kestrel I’ve come across on a couple of days this week.  I had first spotted him in a field near our house, dismembering and eating some small creature just 6 feet away from where I stood staring at him.  He flapped off crossly to a nearby wall when he considered I’d got too close, and it was on this wall I saw him the next day too.  Today he wasn’t there.  I think there were too many dogs out walking their owners.

Then I went down into Beatswell Woods.  I hoped for buds on the trees, or a few early flowers, but it was wet and wintry still.  Then I walked to the fields, thinking I’d choose one of the paths there to take me in a big sweep round the edge of the village.  No go.  All the paths were muddy, and the horse I stopped to chat to had pretty filthy socks too.  Though there was this rowan, with golden honey coloured berries instead of the more usual red.

At the village ponds, the drakes and ducks ran fussily up to greet me, hoping for crusts.  When they saw I had nothing, the drakes returned, like a bunch of fourth formers, to teasing and irritating the only couple of  females in the group. 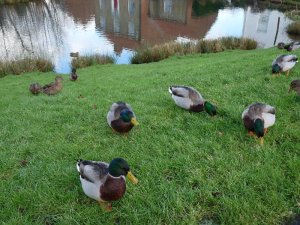 Drakes and ducks hoping for crusts.

But it was near the ponds that I had my second sighting of daffodils this year, so very early.  Surely they should wait until the crocuses have put themselves about?  But the crocuses are only just poking the tips of their leaves above the soil, and don’t plan on coming out yet.

Daffodils by the pond.

Returning to the woods, I saw the snowdrops.  Isolated patches a couple of weeks ago, now they’re in magnificent great white drifts climbing the hillsides, nestling under trees, even risking everything by straggling across the (muddy) paths.

Drifts of snowdrops in the woods.

A bit of a curate’s egg of a walk then.  A few frustrations, quite a few pleasures, but a healthy glow on my cheeks, and, just before I came into the house, another treat.  All these aconites, pushing up their bright yellow faces through the soil, bringing with them hopes of Spring.

Aconites near the back door.

16 thoughts on “The satisfactions of an unsatisfactory walk”